Agneepath Yojana 2022: Defense Minister Rajnath Singh on Tuesday unveiled the Agneepath project. He said the Cabinet Committee on Defense had taken a “historic decision”.The Union government on Tuesday unveiled the ‘Agneepath’ scheme, which radically changes the recruitment process in all three wings of the Indian Army. Under the scheme, ‘Agniveer’ personnel will be recruited in the Army, Navy, and Air Force on short-term contracts. અગ્નિપથ યોજના 2022 The scheme aims to reduce the burden of rising salaries and pensions on the army as well as attract young people to the army through attractive pay scales. Agneepath Yojana 2022 Under the scheme, firefighters will be recruited in the army for a period of four years. After the Cabinet Committee headed by Prime Minister Modi approved the recruitment scheme, the Defense Minister presented details of the new initiative.Today we are introducing a transformative scheme called ‘Agneepath’ which will transform our armed forces and make them more modern,” he said. 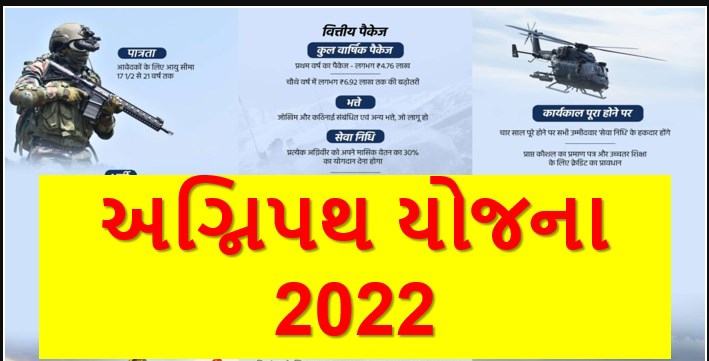 “Under the ‘Agneepath’ scheme, Indian youth will be provided the opportunity to serve in the Armed Forces as ‘Agnavirs’,” the Defense Minister said.”The plan is to strengthen the country’s security and give our youth the opportunity to serve in the military.””You will all agree that the whole country, especially our youth, looks upon the army with respect. Every child wants to wear an army uniform at some point in his life.”Agneepath Yojana will become most secure for all who dont have job

Rajnath Singh said, “Young people will benefit from being easily trained in new technologies. Their health and fitness levels will also improve. Under the Agneepath scheme, efforts are being made to make the profile of the Indian Armed Forces as young as India’s population.”The Defense Minister said, “Agneepath ‘scheme will increase employment opportunities. The skills and experience gained during the service of Agniveer will lead to employment in various fields. Is. “Agneepath Yojana 2022 Read Now details in gujarati also available here.

What is Agneepath Army Bharti Scheme?

The youths involved under this scheme will be recruited in the army for four years.– In the meanwhile firefighters will get attractive salary.– After four years of service in the army, the youth will also be provided more opportunities for the future.– Recruitment in the army has been suspended for the last 2 years due to the Corona epidemic. Earlier, new recruits had to undergo 9 months of training while firefighters would undergo 6 months of training.

The age of the youth who want to be recruited under Agneepath Yojana should be between 17 years 6 months to 21 years. The youth will have the opportunity to serve in the Armed Forces for a total of 4 years including the training period. The recruitment will be done as per the rules laid down by the Army.

What will be the salary of Agneepath?

Earlier, the retirement age in the army was around 40 years but now according to the new rules, soldiers will be recruited for the first 4 years. It is said that at present the soldiers are paid less but according to the new rules they will get a salary of around 30 thousand. With EPF / PPF facility, firefighters will get Rs 4.76 lakh in the first year. By the fourth year the salary can reach Rs. 40 present i.e. Rs. 6.92 lakhs per annum.

What After 4 year happen ?

After four years, Agniveer can apply for the regular cadre. The Army will provide permanent service to a maximum of 25% of the Agniveers of a batch. If Agniveer decides to join the Air Force or the Navy, he will be given special training.

What will be the salary of Agni Veers?

In the first year, Agneepath Yojana Army Bharti the Agniveers will get a salary package of around Rs 4.76 lakh. It will increase every year. In the fourth year, the salary will increase to around Rs 6.92 lakh.

He said that under this scheme, both young men and women would get the opportunity to join the army. The age for application of Agnivir will be from 18.5 years to 21 years. However, the rules of medical and physical fitness for firefighters will be the same as for other soldiers. Under this scheme 10th and 12th standard pass youths will be given the opportunity to be recruited as firefighters in different posts.

“Agneepath is a merit-based recruitment scheme across India for recruitment in the Army, Air Force and Navy. The scheme will provide opportunities for youth to serve in the regular cadre of the Armed Forces,” the defense ministry said.

The firefighters will be recruited with a good financial package for a service period of 4 years including training period. After four years, up to 25 per cent firefighters will be made permanent on the basis of central and transparent system. Recruitment Scheme) is going to be implemented. With this, the dream of millions of youth of the country to join the army will come true. Under this, youth will be recruited in Army, Navy and Air Force. The youth will be recruited for four years under the Agneepath scheme. Soldiers who join the army will be known as ‘Agnavirs’. It is noteworthy here that the average age of the armed forces will decrease after the youth join the army. Apart from this, the pension burden on the government will also end after the retirement of soldiers.

The Agneepath project is also called the Tour of Duty. It is noteworthy here that young men who join the army will be retired with a hefty sum after four years of service. In addition, the government will reward them with diplomas and certificates to secure their future. Along with this they will also be helped to work in other fields including corporate. In this case, let us know about Agneepath Yojana. Also how you will get the opportunity to join the Army under this scheme. Let him explain in detail.

“100 per cent candidates can apply as volunteers for recruitment in regular cadre.”

According to the Ministry of Defense, “Agneepath Yojana will provide an attractive monthly package of up to Rs 30,000 per month to all firefighters and up to Rs 40,000 in the fourth year.

Anil Puri said that in the first year of his four-year career as a soldier, firefighters will get an annual package of Rs 2.5 lakh, which will increase to Rs 3.5 lakh by the end of the fourth year. That means Agnivir’s monthly salary in the first year is Rs. 50,000, out of which Rs. 21,000 will come into his hands. The remaining amount will be deposited in a separate fund and the government will contribute the same amount. Then in the second, third and fourth year the salary of firefighters was Rs. 3,000, Rs. 5,500 and Rs. 20,000. Each Agniveer will be given a service fund package of Rs. 11.61 lakh, which will be tax free.

However, firefighters do not get the benefits of graduation and pension. He was paid Rs. 2 lakh life insurance cover. After completing four years of service, the firefighters will be awarded a ‘Firewall Skill Certificate’, which will help them get another job after military service. In addition, firefighters will be given the opportunity to apply for permanent recruitment in the Armed Forces, depending on the needs and policy of the Army.

Army Chief General Manoj Pandey said that the new process will radically change our recruitment process. However, no compromise will be made with the physical, medical and professional criteria and norms for recruitment of soldiers. At present, the Army recruits young men for an initial period of 10 years under the Short Service Commission, which is extended to 15 years.